F&BV Digital Profile (Fraud & Blind Verification) goal was to update the existing line permissions page and experience. T-Mobile wants to create a single ID for all its products and services. We wanted to change the experience from using MSISDNS (which is your phone number, also referred to as lines) to using T-Mobile IDs. T-Mobile ID was first used for digital products but will be expanded to cover all of T-Mobile. You do not need an MSISDN for a T-Mobile ID, users can use their email to sign up for one as well.

This project did not have funding for research for MVP. For the next phase of the project, we'll be partnering with the UX research team to do testing on the MVP designs and will use the results for phase 2. We used existing research for this project but it was mainly a UI project. At first, the team didn't think it would require much time and effort but as we dug into it, we realized that this is a complex, technically limited project and that we had to be very careful not to break the experience across all of T-Mobile which includes retail, care, and digital. Our decisions will influence how T-Mobile handles this experience across the board.

I was the lead designer for this project. I worked with numerous stakeholders from all parts of T-Mobile to ensure this feature was successfully launched across T-Mobile Digital, T-Mobile Customer Care, and T-Mobile Retail.

Line permissions exist under a blade called Line settings which is under the Profile settings section. Existing research had mixed results with the current experience. While some research showed that the experience was easy to use it also showed that users were slow doing so at times and that it wasn't easy to find for some users. Tree tests and card sorts were done to try to figure out the best organization for Profile.

After many conversations, we settled on using User roles as the new title of the page. Past research showed that Line permissions wasn't the preferred term for the experience. This was not only updated on this page but across all of T-Mobile. As I said above, it's now its own blade under Profile, outside of Line settings.

We went with roles and not permissions because each role has its own unique permissions associated with it. Permissions can also change over time while the roles will stay the same. 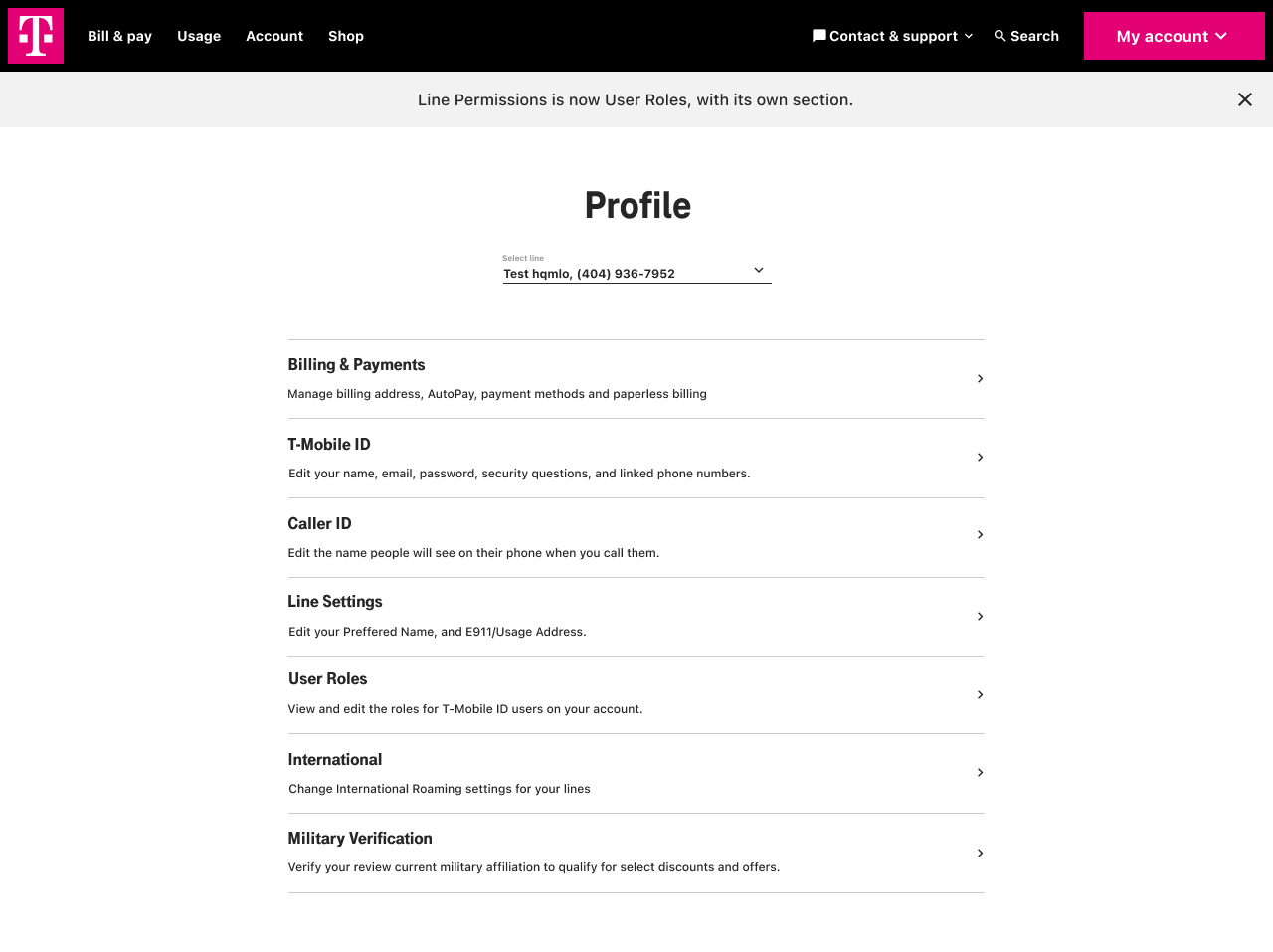 The three sections on the User roles page

Each user role will have a different experience on this page.

A T-Mobile ID can also be incomplete which we call an incomplete profile. This happens when a user has not logged in yet after retail has created their T-Mobile ID for them or if they haven't connected an MSISDN to their T-Mobile ID. Users can create a T-Mobile ID with an email but will have restricted access until an MSISDN is connected. If the incomplete profile has an MSISDN attached to it, they can log in to complete their profile. If the Primary Account Holder changes their user role, that will also complete their profile. In the case where a T-Mobile ID is incomplete with just an email, the Primary Account Holder will have to call care or go to a retail store to edit that user's role since the role is technically tied to the MSISDN still (will explain further in the next section).

This is the section for the legacy system used by retail. This system gives users the Authorized User role that I listed above but is not a part of the digital system. If a Primary Account Holder changes someone from an Authorized User to a Standard or Restricted User and they're listed here, they'll still have their Authorized User permissions. The Primary account holder will have to call care or go to a retail store to get this user removed to fully remove them as an authorized user. There is nothing we can do to stop this until this system is gone. This section of the page is raw text imported in by an API.

This is the no access feature that I described above. If a user is given no access, they'll retain their user role but will not be able to login into T-Mobile's website or app. Discussions were had about moving this feature to another page but for now, it must remain on this page. 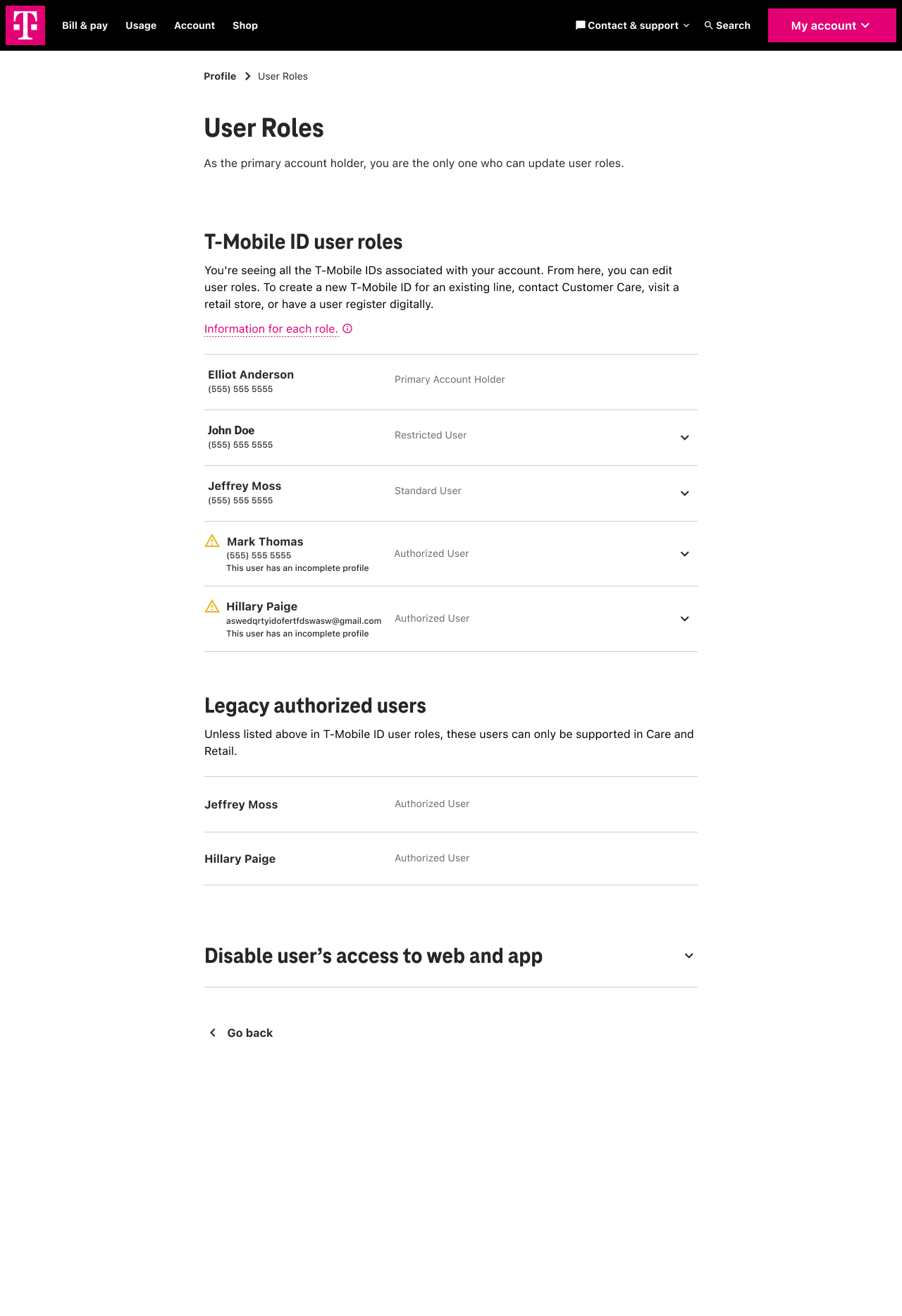 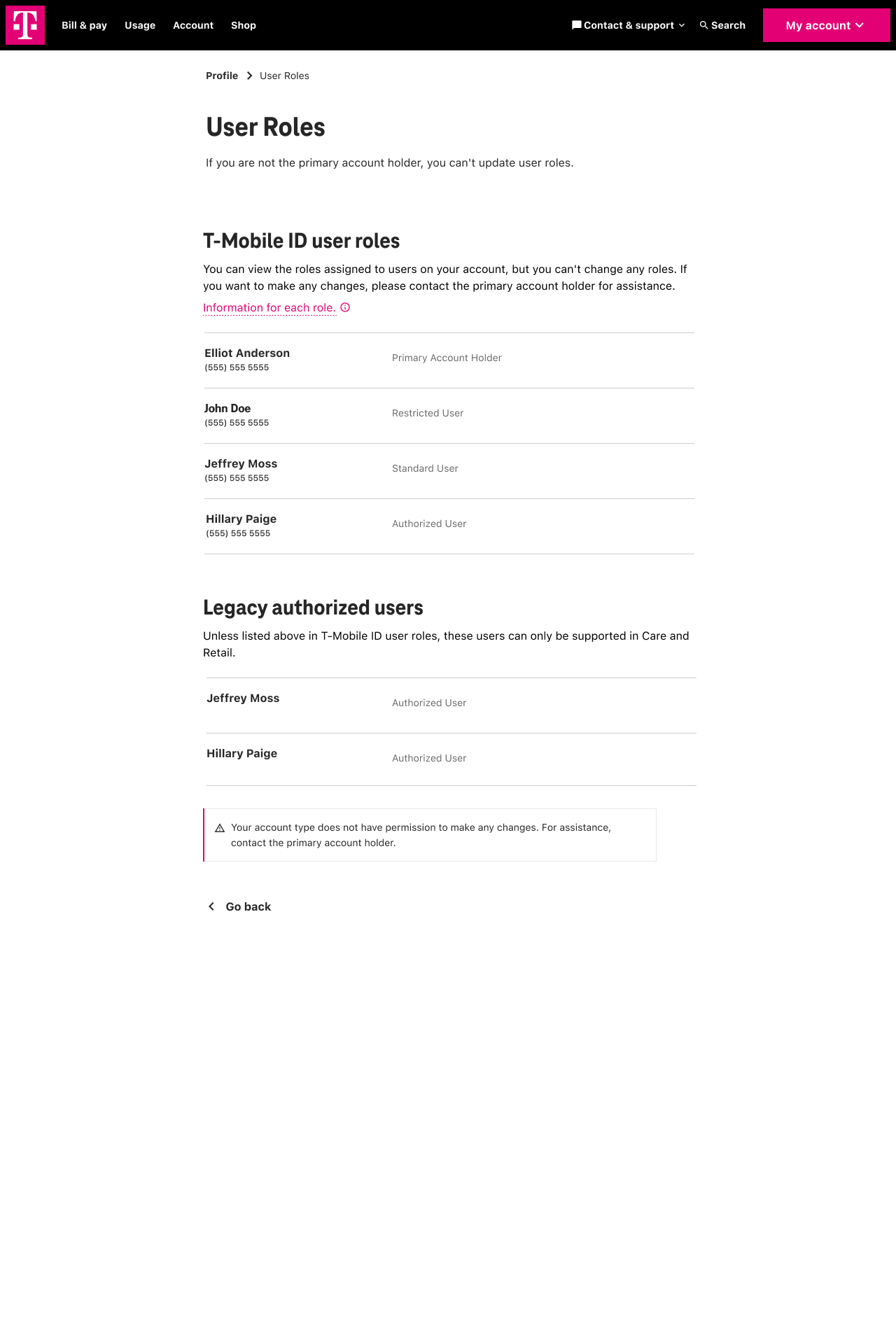 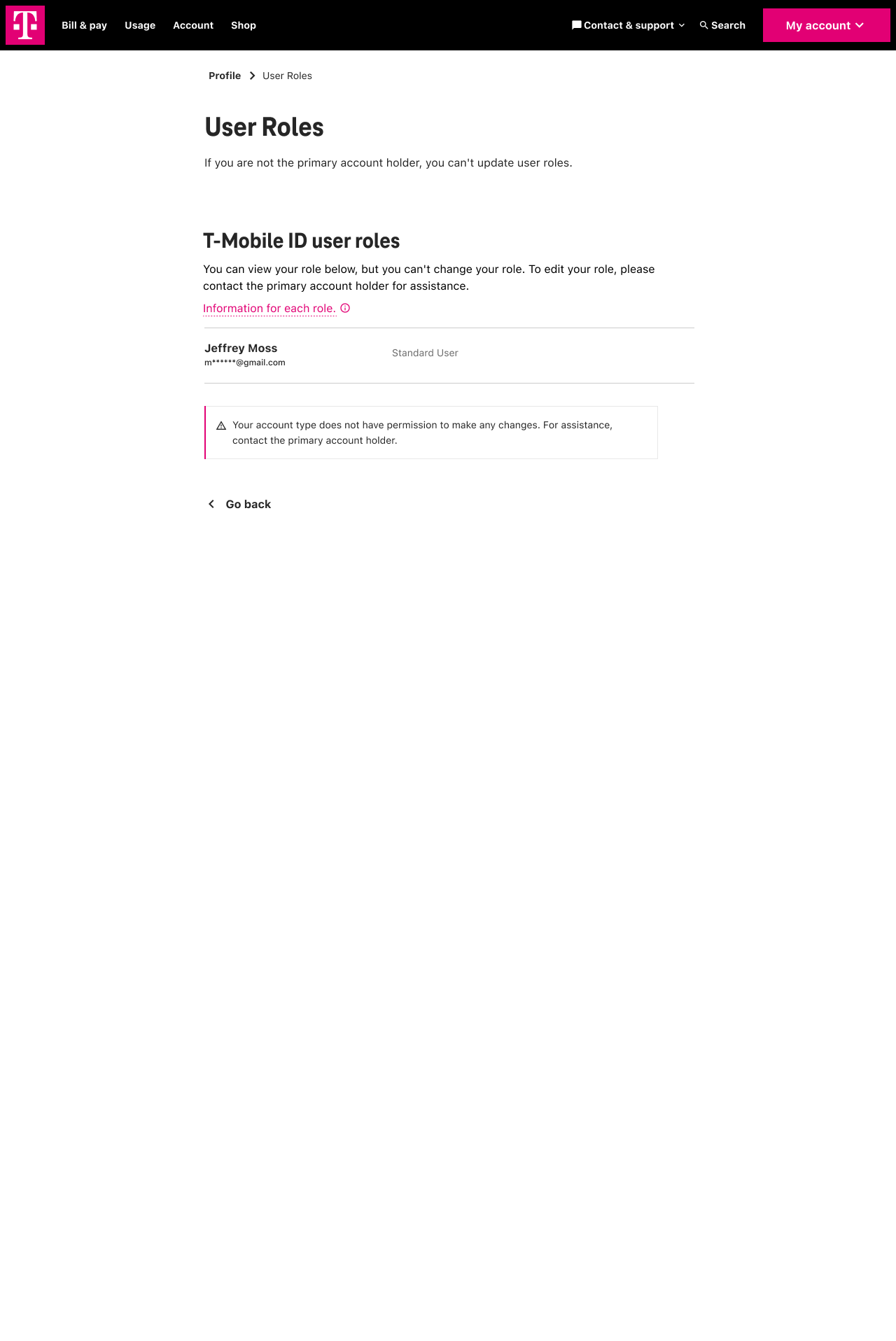 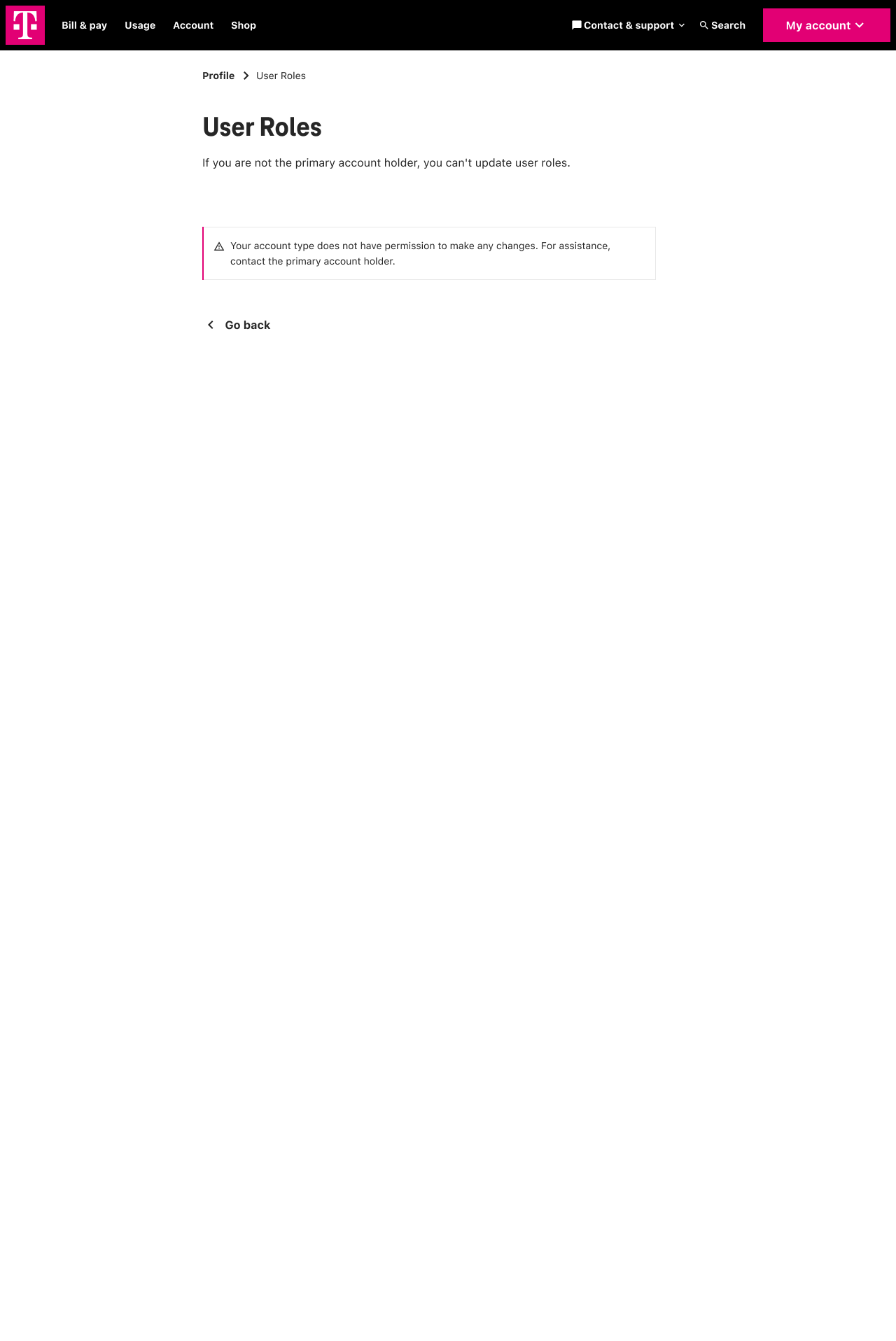 If we listed all the different phone numbers with a T-Mobile ID separately, it would have to update the rest to the highest role whenever a change happens or have it appear as they're different even though on the back end, they'll all have the same user role even if it shows they have a different one.

To help explain this visually. Let's say John Doe has a T-Mobile ID that has three MSISDNs connected to it. 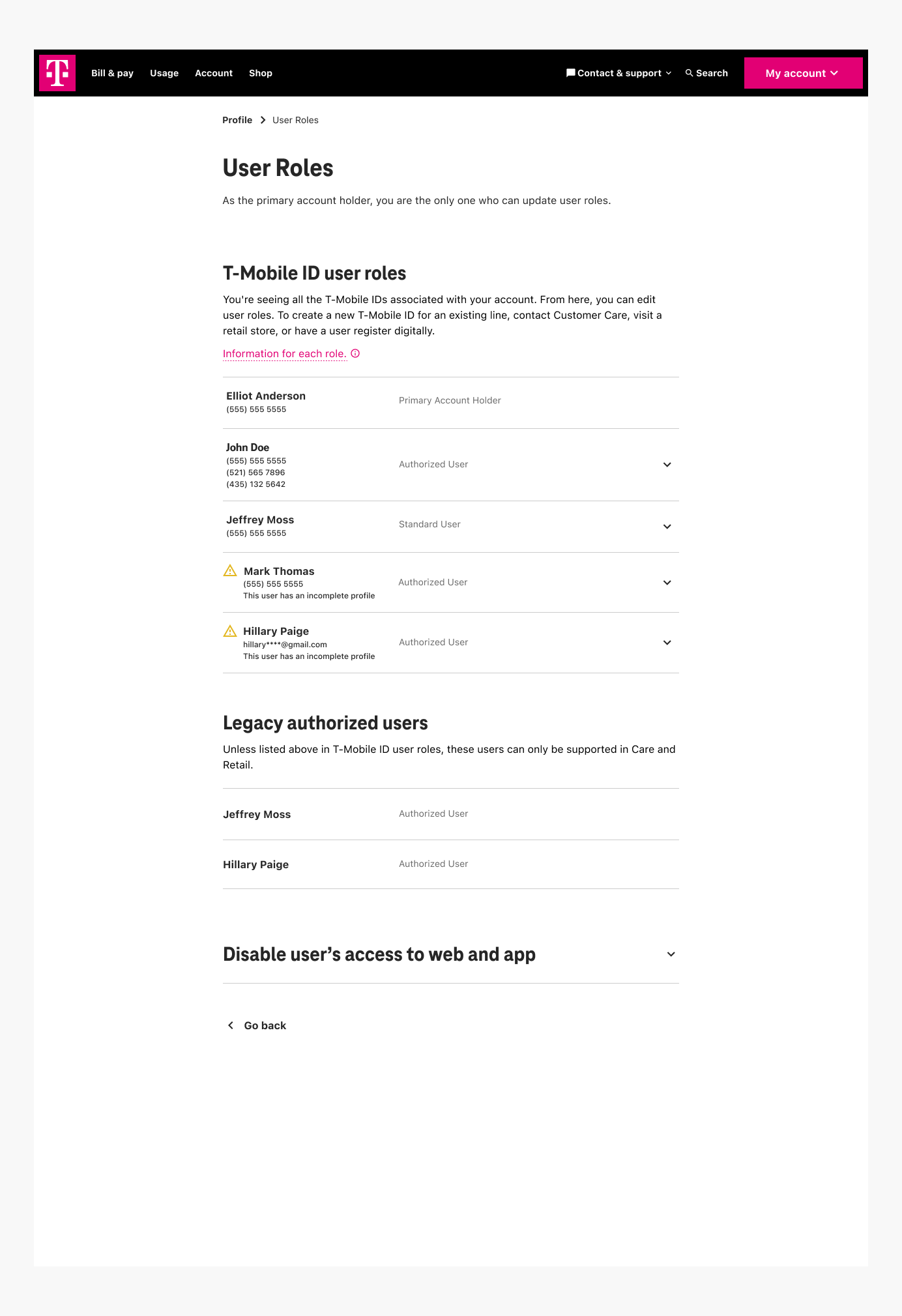 I created four flows from the Primary Account Holder view since they are the only person allowed to make any changes on this page.

Q1 of 2023, we'll be starting phase 2 of this project. We'll start by testing these new designs and use that information to make any necessary updates to the designs and we'll be introducing new features to this flow.